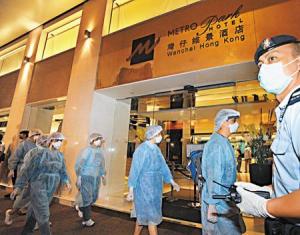 Today as I was walking home, I noticed a group of policemen and reporters standing at the door of the Metropark Hotel in Wanchai, which is almost next door to my appartment building.

I had no clue what was going on…I didn’t think much of it though.

I walked to the building and saw a lady wiping the floor with chlorine… I still did not connect the dots, I went home and started watching T.V.

A couple of hours later my husband came home, he told me “the street is full with policemen, apparently someone with the swine-flu fell over in the hotel next door”…in that moment, it all made sense to me… I couldn’t believe that I missed all the sings…

I guess in retrospect it all seems too obvious; the H1N1 virus is all over the media…and I knew that it had come to Asia…there were warning signs all over…but I missed them, I guess I never imagined it would get so close….

Warnings
This incident made me wonder; how many times have I heard warnings and I failed to pay attention?

Warnings are preventative statements which guide us to safety in different settings of life…and we know them since childhood…from our parents, teachers and other authority figures. Warnings are given to us in most cases by people who care for our wellbeing to a greater or lesser extent…right?

This I came across a documentary named “Zeitgeist”, and what I saw reminded me of a warning given to us in the Bible; Peter warns Christians in 2nd Peter 2 that there would be people who would deny Christ’s divinity…he calls them false teachers.

The documentary “Zeitgeist” is one of those teachings…it begins with a description of different mythological figures of antiquity. It records how various civilizations had similar accounts of a “savior god”…which sound very similar to Jesus Christ…putting into question whether Christ is really the only true God-savior.

The way I came across “Zeitgeist” is because as a result of watching the documentary, someone asked the question, “How do we know that Jesus is the real God”? So I figured I should try to understand where the question is coming from….

As I watched the documentary, there were accounts of several Egyptian, Indian, and Greek mythical gods who were said to have the same traits as Jesus did. I wasn’t familiar with any of them until something caught my attention… a very specific comparison made between a Greek god named Dionysius and Jesus.

I remembered a course that I took my third year of college called “Classics”…it was an overview of Greek Mythology and Literature.

Dionysius
Dionysius is an important figure in ancient Greek culture because he is linked with the classic Greek theatre.

Oedipus Rex (a piece that most people read in high school) was written by Sophocles to be performed in the theater festival; a festival in honor of Dionysius celebrated each spring.

Dionysius is said to be the god who discovered how to make wine and he is also the god of nature and fertility (source: Encyclopedia Mythica http://www.pantheon.org/articles/d/dionysus.html) …every spring as the green sprouts emerged after the winter and the animals were mating; the Greeks would interpret this as the resurrection of Dionysius. This is what I had learned about Dionysius at the University in my “Classics” course.

As I watched the video, I couldn’t help but notice that some concrete statements were made about Dionysius; the video stated that Dionysius is said to “turn water into wine” which according to my understanding of the mythological account is a gross generalization…

Dyonisius is said to have discovered and perfected the process of wine creation, which he later on spread through Asia-minor. This act is completely different to a miraculous act of transubstantiation (turning one substance into a different substance) performed by Jesus…the Bible narrates in the New Testament how Jesus turned water into wine…not by a process, but by a miraculous act. (I have included the text which is John 2).

Jesus Changes Water to Wine 1 On the third day a wedding took place at Cana in Galilee. Jesus’ mother was there,
2 and Jesus and his disciples had also been invited to the wedding.
3 When the wine was gone, Jesus’ mother said to him, “They have no more wine.”
4 “Dear woman, why do you involve me?” Jesus replied, “My time has not yet come.”
5 His mother said to the servants, “Do whatever he tells you.”
6 Nearby stood six stone water jars, the kind used by the Jews for ceremonial washing, each holding from twenty to thirty gallons.
7 Jesus said to the servants, “Fill the jars with water”; so they filled them to the brim.
8 Then he told them, “Now draw some out and take it to the master of the banquet.”
They did so,
9 and the master of the banquet tasted the water that had been turned into wine. He did not realize where it had come from, though the servants who had drawn the water knew. Then he called the bridegroom aside
10 and said, “Everyone brings out the choice wine first and then the cheaper wine after the guests have had too much to drink; but you have saved the best till now.”
11 This, the first of his miraculous signs, Jesus performed in Cana of Galilee. He thus revealed his glory, and his disciples put their faith in him.

Having studied a bit of Greek mythology, I could see how the statements made about Dyonisius in the “Zeitgeist” documentary are deceitful…it is clear to me that the producers of the video have the intention of presenting the Biblical account of Jesus’ life and resurrection as nothing but a repeated version of other previous mythologies…when it is not at all the case…

Broad generalizations such as the ones used in this documentary are dangerous; history has shown that they lead to prejudice and exclusion. As an individuals, people normally wouldn’t pass judgment on someone based on stereotypes or generalizations about their race, ethnicity or culture… Now, it is should be the same case with faith…we should encourage people not to base their conclusions about God or Jesus on broad generalizations.

I am not familiar with Indian, Persian or Egyptian mythology…but I am sure that when looking at them in detail we will find that the statements made in the documentary about those mythical figures are not completely true…that generalizations have also been used in those cases to make the mythical figures seem exactly the same as Jesus… this means that you cannot trust the statements made in the video…Jesus is not a mythological figure.

There is ample historical evidence that Jesus was an actual person who lived and walked on earth 2000 years ago. The Jewish historian Flavius Josephus recorded the existence of Jesus (37 A.D.), another Roman historian named Cornelius Tacitus recorded Jesus’ existence too (112 A.D). I do not think that other historians have documented the existence of Dionysius or other mythological figures; because they are mythology….but Jesus is real.

“For there is one God and one mediator between God and men, the man Christ Jesus.”

“I pray that they will all be one, just as you and I are one—as you are in me, Father, and I am in you. And may they be in us so that the world will believe you sent me.”

“There is a God shaped vacuum in the heart of every man which cannot be filled by any created thing, but only by God, the Creator, made known through Jesus.“

“But in your hearts set apart Christ as Lord. Always be prepared to give an answer to everyone who asks you to give the reason for the hope that you have. But do this with gentleness and respect”

Jesus is real, Jesus is God and he saves…some might want to deny these facts…
We can consider ourselves warned.