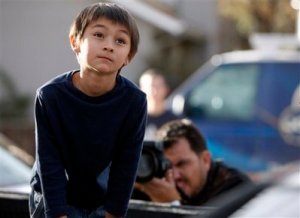 
What does it mean to believe?
Online dictionaries give the following definitions:


1. To accept as true or real
2. To expect or suppose
3. To have confidence in the reliability of something


However, my favorite definition is the one I found in the sign language dictionary:


In sign language, the word “believe” consists of two gestures, the gesture for “thinking” followed by the gesture for “acting”. I find this definition really appropriate, because it summarizes the essence of what it is to belive…you think a certain way about something or someone, and then you act based on that thought…a good illustration for this fact is the story of the Heeney family and little Falcon.


These last couple of weeks, there were several reports in the news that told the story about a little boy named Falcon.


Falcon, the Balloon Boy
Falcon is six years old; he lives in Colorado with his parents and two brothers…sounds pretty normal so far…but the story is full of twists…


It turns out that Falcon and his dad and brothers like to build things for fun, the latest project was a hot-air balloon which they were getting ready to finish two or three weeks ago.
One day Falcon’s father, Falcon, and his older brother were working on the balloon in the garden…the dad left for a minute and somehow the balloon started flying.


The original story that the Heeney’s told the authorities was that when Mr. Heeney (Falcon’s dad) came back to the yard, he noticed that the balloon was gone, and so was Falcon. He asked the older son “where is your brother?” and the boy answered him…”I don’t know…I think I saw him get inside the box of the hot air balloon”…


The family called 911 and they called the news channel in order to ask for help to bring the boy back down from the air safe and sound.  Soon the news started reporting about the balloon and everyone in the United States started following the developments of this situation.


The reporters and the people in general where worried about the boys safety, could the balloon crash with another flying object? Was the air too cold for little Falcon to survive? And of course, the big question, could Falcon fall out of the box from the hot air balloon?


The authorities closed down the airport, launched two military helicopters and countless policemen to try to bring the boy to safety. After a few hours, the balloon landed on a field and everyone ran to try to get the boy to safety…and the boy was not there. So the policemen tracked down the route where the balloon had flown in order to see if the boy had fallen out of the balloon…and they couldn’t find anything, until finally they found the little boy…do you know where?


Falcon was found safe and sound in his garage…where he had been hiding all along.


Even though this story seemingly has a happy ending…and everyone was relieved to see that Falcon was safe, the authorities soon became suspicious of the parents, and there has been an ongoing investigation to determine whether the whole incident was real or not, I guess we will find out in time.


Regardless of the outcome of events, the story is a powerful example of how what we believe to be true can shape or actions in a powerful ways. In this case, the resources of the entire state of Colorado were set in motion in order to “rescue” a boy because people believed he was in danger. Everyone was under the impression that the boy would be in flying in the air, they thought that he would be in danger…and this is why they took radical measures to prevent any danger for the boy; they closed the airport and launched military helicopters to try to extract the boy from the balloon in mid-air.


This incident exemplifies key points about our beliefs:


1. Our beliefs set the guidelines and boundaries of our actions not only when it comes to other people, but also when it comes to ourselves too. Beliefs are views, guiding principles, judgments and decisions about ourselves, people close to us, our community and how the world functions and they help determine our actions.


Why is it important that we understand this? Because we need to make sure that we are operating under the right beliefs, and not under false beliefs…because our beliefs are going to shape our life for better or for worse. Let me illustrate;


Once upon a time there was an Italian sailor named Christopher Columbus. During his lifetime, people used to believe that the earth was flat and that the world consisted of Asia, Europe and Africa…no North America, or South America or the Caribbean…which is kind of sad. But anyway, Christopher Columbus did not share in the false belief that the earth was flat, he thought the earth was round, and he didn’t let false beliefs operating around him determine his actions…he sailed away to prove his point…and found America. In short, a man who believed the right thing literally changed the shape of the world and the outcome of history. This is very powerful.


So at this point, let me ask you a question, what are some things you believe? Are you aware of your beliefs and how they work to shape your life?


We get our beliefs from three main sources; experience, evidence and our environment…however those sources are not always sufficient and can be misleading, because our understanding is limited.


Proverbs 3:5 warns us against relying solely on our understanding of things;


“Trust in the Lord with all your heart, and lean not on your own understanding”Now that we’ve touched on God’s word, let’s talk about what we believe as Christians…
Christians are also called BELIEVERS…however this is a bit arbitrary because everyone believes…every person in the world whether secular or religious has a set of beliefs.
So what is the difference? Well, we could say that Christians have a specific kind of belief and this is called FAITH….faith in God.


Let’s talk a little bit about faith, what is faith?


“Now faith is being sure of what we hope for and being certain of what we do not see.”So basically, faith is a belief, but the kind of belief that is not based on what we see in daily experience, evidence or environment, faith is believing in what we have not seen yet.


Faith is believing in what God has already done.


How does faith originate? How do we get faith?


The bible tells us that we receive faith when we hear God’s word and we believe it.


“Consequently, faith comes from hearing the message, and the message is heard through the word of Christ.”


According to the bible, faith is not just a warm, fuzzy feeling on the inside; it is a conviction that leads to action, actions that reflect our belief in God’s word.


“What good is it, my brothers, if a man claims to have faith but has no deeds? Can such faith save him? Suppose a brother or sister is without clothes and daily food. IF one of you says to him, Go I wish you well; keep warm and well fed, but does nothing about his physical needs, what good is it? In the same way, faith by itself, if it is not accompanied by action, is dead.”
The book of James tells us that faith cannot be passive, it has to be active.


I ask myself, and maybe if you want to you can ask yourself too; how is your faith, is it dead or alive? Is it active or just passive?


It is really easy to fall into the trap of a passive faith, which stays at the level of thoughts and never translates into concrete actions…but according to the bible, we should strive that our faith is evidenced by our actions…


Hebrews 11:6
And without faith it is impossible to please God, because anyone who comes to him must believe that he exists and that he rewards those who earnestly seek him.


God is pleased by faith…and the first expression of faith is to come to him believing that he is there for us….I pray and hope that this faith can always find an expression in our life.


God is a great God…he can do things beyond what we ask or think in our lives…all he asks is that we believe.