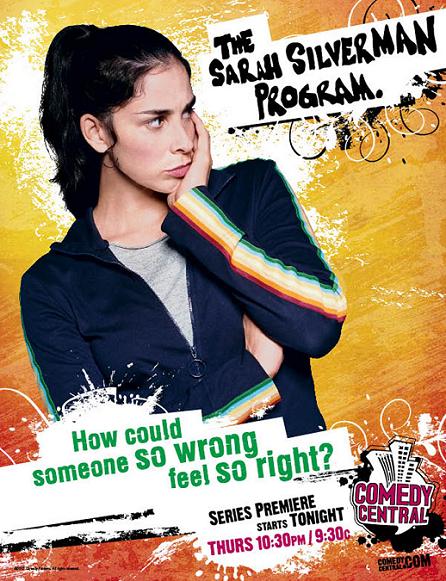 Recently, I was introduced to the Sarah Silverman show (yes, I know…I don’t get comedy central in HK). Anyway, I saw the short clip of the show titled “Kickball Day” and it is HILLARIOUS…you can see clips of the show on I-Tunes or at comedycentral.com… I heard not all of them are as good as the one I saw…but as far as the Kickball episode; I totally recommend it.

On that episode, Sarah & friends have a sleepover after the Kickball day…and Sarah gets introduced to the term “overshare”. Overshare basically means that someone is sharing too much information or getting too personal in whatever they are saying. So, in certain social situations, if people want to avoid hearing some story which is either too personal or inappropriate, they are compelled to scream “overshare” and end the conversation…

In the “Kickball” episode, we get to see Sarah use the “o” word with her friends. This is my favorite part of the whole clip; it would not be nearly as funny if I told the story in detail, so you should definitely watch it for a good laugh. This is the website where you can get the link to download the episodes in I-Tunes; (http://www.truveo.com/search.php?query=sarah+silverman+plays+Kickball)

The idea of interjecting “overshare” whenever someone is giving us more information that we wanted to hear has caught up in our youth group…and has become an inside joke.

The whole “overshare” topic reminded me of an article written by Gerry McGovern titled “Information Overload: Too Much Information, Too Little Time” (http://www.gerrymcgovern.com/nt/2002/nt_2002_07_29_overload.htm). In the article, McGovern states that one of the main problems in modern society is the fact that we have so many channels fueling us information (mobile phones, TV., computers, etc.), that our capacity to process the information is not enough to keep up. According to McGovern’s calculations our brains are in a race against technology, and unfortunately we are not on the winning side…“the law of the human brain dictates that every eighteen months the amount of information we are exposed to doubles while our attention span halves.”

Wouldn’t it be nice to be able to say “overshare” in these cases??? Take time to process and analyze things before having to deal with the next batch of information??? I remember one specific case; before our final exam last semester I was sitting in an Economics class and our professor gave a review of the whole semester…he concluded the class by asking if we had any questions…*dead silence* …nobody had questions. It wasn’t that we were all geniuses and understood everything…it was just that we hadn’t had time to process the information given to us…and we didn’t even know what questions to ask!!!! We had received more information than our brains were able to handle.

The bible narrates of a similar experience faced by a man named Nicodemus. Nicodemus was a Pharisee who lived during New Testament times on the earth…one night Nicodemus sneaked out of his house in order to talk to Jesus.

John 3 says;
1Now there was a man of the Pharisees named Nicodemus, a member of the Jewish ruling council. 2He came to Jesus at night and said, “Rabbi, we know you are a teacher who has come from God. For no one could perform the miraculous signs you are doing if God were not with him.”
3In reply Jesus declared, “I tell you the truth, no one can see the kingdom of God unless he is born again.”
4″How can a man be born when he is old?” Nicodemus asked. “Surely he cannot enter a second time into his mother’s womb to be born!”
5Jesus answered, “I tell you the truth, no one can enter the kingdom of God unless he is born of water and the Spirit. 6Flesh gives birth to flesh, but the Spirit gives birth to spirit. 7You should not be surprised at my saying, ‘You must be born again.’ 8The wind blows wherever it pleases. You hear its sound, but you cannot tell where it comes from or where it is going. So it is with everyone born of the Spirit.”
9″How can this be?” Nicodemus asked.
10″You are Israel’s teacher,” said Jesus, “and do you not understand these things? 11I tell you the truth, we speak of what we know, and we testify to what we have seen, but still you people do not accept our testimony. 12I have spoken to you of earthly things and you do not believe; how then will you believe if I speak of heavenly things? 13No one has ever gone into heaven except the one who came from heaven—the Son of Man.14Just as Moses lifted up the snake in the desert, so the Son of Man must be lifted up, 15that everyone who believes in him may have eternal life.
16″For God so loved the world that he gave his one and only Son,that whoever believes in him shall not perish but have eternal life. 17For God did not send his Son into the world to condemn the world, but to save the world through him.

All my life I had known the bible verse John 3:16. For evangelical Christians, this is the one bible verse that you memorize and know to locate in the bible. I also knew the story of Nicodemus by heart, but I must admit that it was only two years ago, when my husband Tim preached a sermon about this passage that I saw the context of Nicodemus’ Journey and the famous John 3:16 verse together for the first time.

During the time of Nicodemus, access to information was not as common as it is today; it was a rare commodity, reserved only for the elite. It is remarkable then that the first thing we hear Nicodemus say is “we know”… Nicodemus is no ignoramus (sorry I couldn’t resist ;P)… he was an intellectual of his time; a man trained to obtain information, to analyze it, process it and digest it. We can safely deduce that Nicodemus wouldn’t have been overwhelmed with the prospect of receiving large amounts of information (as much as it was available at the time), he was used to dealing with it.

Nicodemus expresses knowledge about Jesus, he comes to Jesus to make a statement about his stance, but Jesus responds to Nicodemus as if he had asked a question…why?

Just before starting this passage, the bible mentions that Jesus knows what goes on inside the hearts of people. The last verse of John 2 in the Amplified Version reads: “And He did not need anyone to bear witness concerning man [needed no evidence from anyone about men], for He Himself knew what was in human nature. [He could read men’s hearts.]”

Jesus knew what was inside Nicodemus’ heart…he knew all the questions and uncertainties he was pondering about…In his sermon about this passage, Tim made a comment and said that if he went to a computer class, he would not know what questions to ask, because his knowledge of computers is so little that he would not even know how to ask the right questions. (He’s not that bad)….but I can totally relate; I felt the same way in the Economics class after the final exam review I was overwhelmed and couldn’t process the information enough to come up with a question… and maybe this was the case of Nicodemus, he came to Jesus, but he did not know what questions to ask, however Jesus who knew what was is in his heart answered the unexpressed questions…

God is like that… “for your Father knows what you need before you ask him” Mat 6:8.

In his answer, Jesus tells Nicodemus that he needs to be born again… the bible shows how Nicodemus was overwhelmed by this information…he asks “How can a man be born when he is old?” I guess this would’ve been the time where Sarah Silverman would’ve interjected “overshare”….

Going back to Nicodemus’ statement he said “we know”, he knew a lot of things…but he couldn’t process this one statement…why?

There is a difference between knowing and believing. Having knowledge is not the same as having a conviction of faith. The main message that Jesus is conveying to Nicodemus is that we need to be convicted, that conviction comes from seeking relationship with God and not rituals or rationalization. During Jesus’ time, most Pharisees were seeking God through rituals and reasoning the law…but now God was standing in the flesh before Nicodemus, offering him a way of finding God that he had never heard about before; through a relationship and a new birth.

As humans we tend to want to find formulas for everything, including God, and this was the case with Nicodemus. There are so many religions, and so many flavors of Christianity that some of us might be experiencing an information overload regarding God and faith…too much information…and I guess it would be nice if we could stop it by saying “overshare!”

The good news is that God is patient with us…he wants us to think things through…to process things. He loves us regardless of our doubts about him and is waiting for us…all the time…never tired, never angry, never bored, eager to help us process things through so that we can know him.

We are free to make up our mind, think about things and come back to him, with all of our questions, doubts and observations…he’s always there for us and knows our hearts…so never be afraid to come to him, even if you don’t quite know what to ask in his presence.

The bible tells later that Nicodemus returned home without making a clear transition from knowledge to conviction. However, later in the bible Nicodemus appears again next to Joseph from Arimatea, who was a follower of Christ. Nicodemus buys mhyrr for Jesus’ tomb…this is the task of a disciple, and Nicodemus undertakes this task. The amount of Mhyrr he buys is the amount fit for a King. So I think that through his actions Nicodemus is saying Jesus is my King, and I am his disciple…I hope for his sake.

I guess Nicodemus’ journey reflects every Christian’s faith journey; we go from knowledge to conviction, from facts to faith. The challenge is to remain flexible, because as we walk with God there is always this tendency to ritualize, and this impairs our spiritual growth. So this look at Nicodemus has not only value for those who encounter Jesus for the first time, but also for all of us, because we need to encounter Jesus afresh over and over again.